Why AngularJS is a Better Technical Solution for your Project

Why AngularJS is a Better Technical Solution for your Project This blog is about one such framework that is loved by the developers’ community. Yes, you guessed it right! We will be discussing everything related to Angular and AngularJS.

We will start with what is Angular and why use it to the type of projects in which it will be a perfect choice.

Of course, this blog will be your basic guide, it is always better to consult your Javascript development company for a clearer idea.

Basics of Angular and AngularJS

As per the 2018 Stack Overflow survey, Angular is the second most used technology. It is an open-source framework created by Google.

The framework was introduced in 2009 but has improved with time and eliminated its initial drawbacks. Its improvement all these years has finally resulted in 44.3% of developers using it, as per the Stack Overflow Developer Survey 2017.

We are often asked about the difference between Angular and AngularJs by non-technical people. So, here goes the answer!

In 2010, the primary benefit of the Angular.js framework was that you can turn HTML documents into dynamic content. As HTML was a static language, users could not actively interact with the web pages.

There were some options to build single-page applications but the methods were too complex. But in the case of Angular.js architecture, the development efforts in creating dynamic content were reduced.

Google released the Angular framework in September 2016. It was developed by the same team but was completely rewritten to cater to the requirements of the modern web.

There is a huge difference between the two versions so just updating one from the other was not enough. If you are thinking about migrating the application then that too needed many modifications due to differences in syntax.

Hopefully, now all your basic questions like what is Angular Javascript and the difference between Angular and AngularJS are clear. So, let’s get down to the main point of discussion – reasons to choose Angular.

Why Angular For Your Project?

The biggest advantage of the Angular javascript is that it has Google’s support. It can be said that Google has plans to stick to the framework in the long run and further develop and scale the framework’s ecosystem.

The Angular apps are developed using TypeScript. It is a superscript for JavaScript which makes sure that the security is higher. TypeScript will allow you to identify and solve errors earlier in the development stage while writing code or during the maintenance tasks.

CoffeeScript or Dart is a stand-alone language while TypeScript is not. Moreover, in the case of TypeScript code, there is an option to directly debug it in the browser/editor only if you created map files during the build time.

Some advantages of TypeScript is that it improves refactoring, autocompletion services, and navigation. Not only that but there is an option to opt-out of the inbuilt features. Javascript Angular framework makes use of HTML for UI of the app. HTML is less complex in comparison to JavaScript and also an intuitive one.

Are you thinking how is this all related and helpful? As HTML is used to define the UI, you don’t have to spend a lot of time in deciding the program flows.

As every object used in Angular is POJO, there is no requirement for additional setter and getter functions.

POJO enables manipulation of the objects by offering all the conventional JavaScript functionalities. There is an option to add/remove properties from objects.

We have often heard that testing is easier with Angular. But what is the reason behind it? It is because Angularjs frameworks modules have easy to manipulate application parts.

As the modules can be separated, you can individually load the necessary services and perform automated testing on them. Also, you are saved from remembering the order in which modules are loaded if you follow the “one file-one module” principle.

Original Model-View-Controller architectural pattern is embedded in Angular. But it is not as per the industry standards. An Angular developer is not required to divide the Angular app into multiple MVC components and develop a code that has the capability to combine them later.

Instead, it only asks for division, and the rest is taken care of. Angular Javascript development is also easier as there is no need for unnecessary Angular code.

Its simple MVC architecture eliminates the need for writing getters and setters. To sum up, we can say that with Angular you get faster apps in less coding. Another reason why Angular is considered better among Angular and AngularJS. The code is organized into modules and the module makes it easy to organize the functionalities of an application.

Moreover, with the modules, the functionalities can be converted into reusable chunks. Another benefit of modules is that it allows lazy loading. Lazy loading is when application features are either loaded on-demand or in the background.

The creation of modules is one of the best Angular features as the work can be divided between the team members and at the same time, there are no chances of unorganized coding.

Inconsistent coding may delay your project and also increase the overall costs in the long run. On the other hand, the benefits of consistent coding are user-friendly websites and the use of templates.

Angular universal which is used for server-side rendering brings along multiple advantages for your Angular projects. Firstly, it allows the web crawlers to improve your website’s ranking in the search engine results.

Secondly, the page loading time is also reduced which ultimately improves the website’s performance on smartphones. All of these factors when combined together help to increase the number of visitors on your website.

Read also: What is the best choice: Nodejs vs. ReactJS vs. AngularJS

Which Projects Will Work Best With Angular? 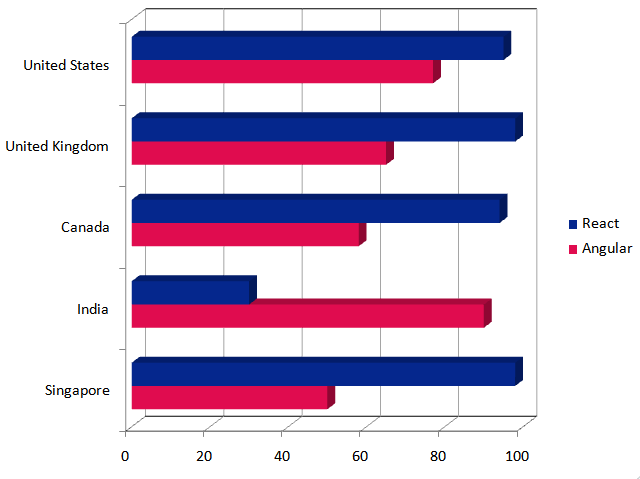 We sincerely hope that by now you are clear about all the confusion between the two – Angular and AngularJS. We have listed down all the major benefits of choosing Angular for your project.

Also, if you cannot decide whether your application type falls under any of the categories mentioned above, you can always ask your AngularJS development company.

As they are experts in the field, they will be able to offer you the best suggestions keeping in mind your project timeline and budget.

Here is the last bit of information to inspire you to choose Angular for your next project. Some of the famous names in the industry that chose Angular are YouTubeTV, Crunchbase, Google Cloud, AIESEC, and NBA.com, etc.

All of these names certainly command some respect and therefore of they chose Angular then you can definitely do that too.

Do you want to discuss with experts whether Angular is the best choice for your project or not? Or did you analyze yourself and decided that Angular developers can do justice to your dream project? Whatever dilemma you are in, just talk to our experts on [email protected]!

What is the latest version of AngularJS?

The latest version of AngularJS is 8.

What is Angular and why use it?

Angular is a framework to develop dynamic web applications. The primary reason to use Angular could be that it allows the creation of single-page applications in a clean and easy to maintain manner.

Which framework is best in terms of development? AngularJS or NodeJS?

Which type of application are built on AngularJS? Any big brand examples?

Some of the popular brands that use AngularJS are The Guardian, Paypal, Upwork, Netflix, Freelancer, Lego, iStock Photo, and Youtube for PS3.